The game is played in a marked field with small goals or hoops (2-4). There are six players in each team wearing special equipment. On their chest and bottom there is a sticky surface to which the sponge ball with which this game is played can cling.

Players are divided into two teams, each with a captain (1+7:7+1). Each team has its own field; captains of the rival team stand at the end of each field and throw the ball at the opponent players. Each player has only one life (or more, if the teams agree) and if he/she is hit, he/she has to go to his/her captain and help him/her. When all the players of one of the teams are hit, the captain steps in and when he/she is hit as well, the game is over 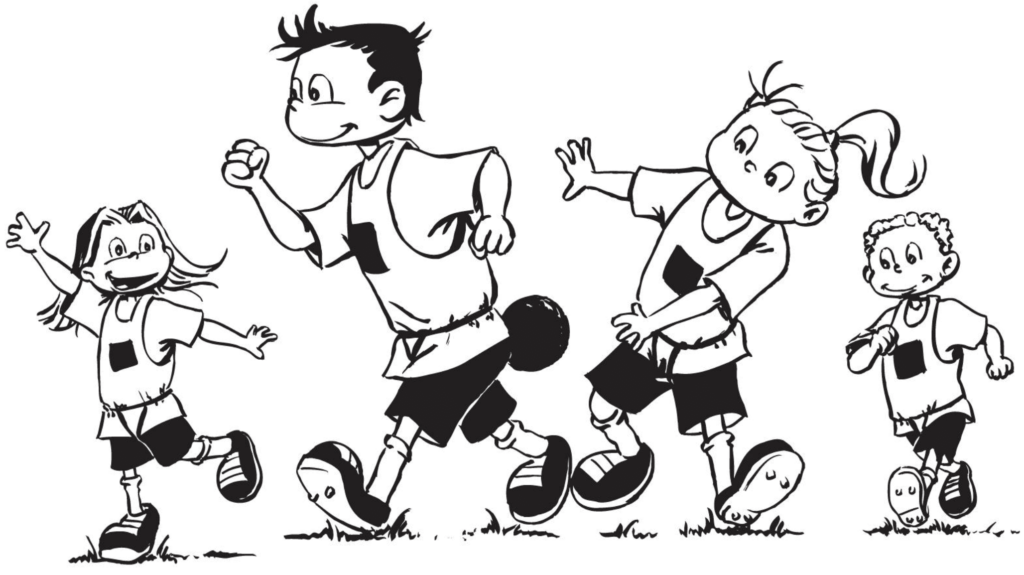 The chaser and the fugitive

Divide the group into pairs. They should all lie down on their stomachs clinging to one another and make a circle together. One pair remains standing to chase one another. The fugitive is running around the circle or among pairs; he/she is also allowed to jump over them. To save him/herself, he may lie beside one of the pairs. At that moment, the outside player in the pair has to stand up and start chasing the hunter. If he/she is caught they exchange roles and continue the chase

Divide the group into teams of four with markers of a different colour. Each team has a ball with which the players move around the playground and pass it among themselves. At coachs signal, each team has to gather to a certain spot with their ball. When the coach for instance says, Four feet on the grass, the players of each team have to hug each other and stand on one foot (or one of them stands on the ground on both feet, two of them on one foot and the fourth player clings on to them with both his feet in the air.). When the coach has checked all the figures, the players let go and keep running around. The coach then issues another command such as 3 feet and 2 hands on the ground, 4 feet and 2 hands, or 3 feet and 4 hands. The players first make a plan and then the figure. The coach checks all the figures and decides on the winner, i.e. the best figure or the quickest team. 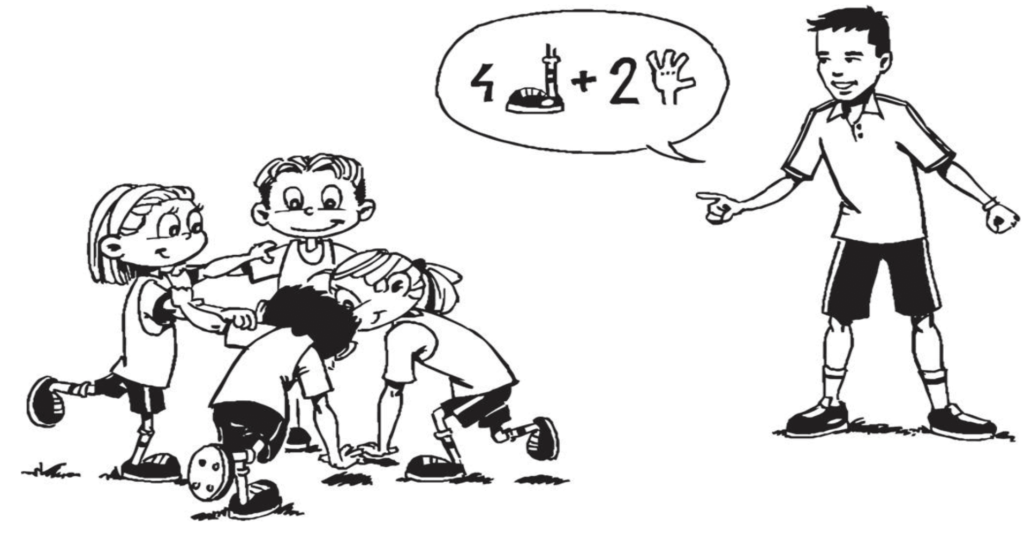 Stand sideways in a circle. Put your hands on the shoulder of the player in front of you. At coachs command (1, 2, 3) start squatting until you are seated on the knees or lap of the player behind you. 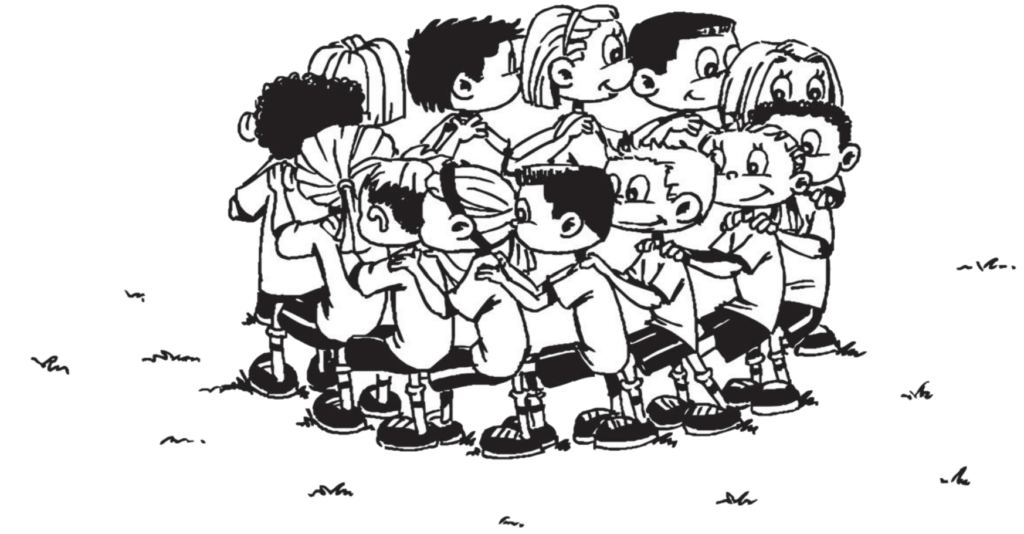 Two goals made of flags, three metres wide, are put in the middle of the playground.
Divide players into two teams with six players.
There is a neutral goalkeeper on each of the goals.

Both teams can score on both goals. Having caught the ball, the goalkeepers throw it into a player-free area.

Each team defends its own goal while attacking the opponents. Both teams can score on both sides. Each team has 7 or 8 players. 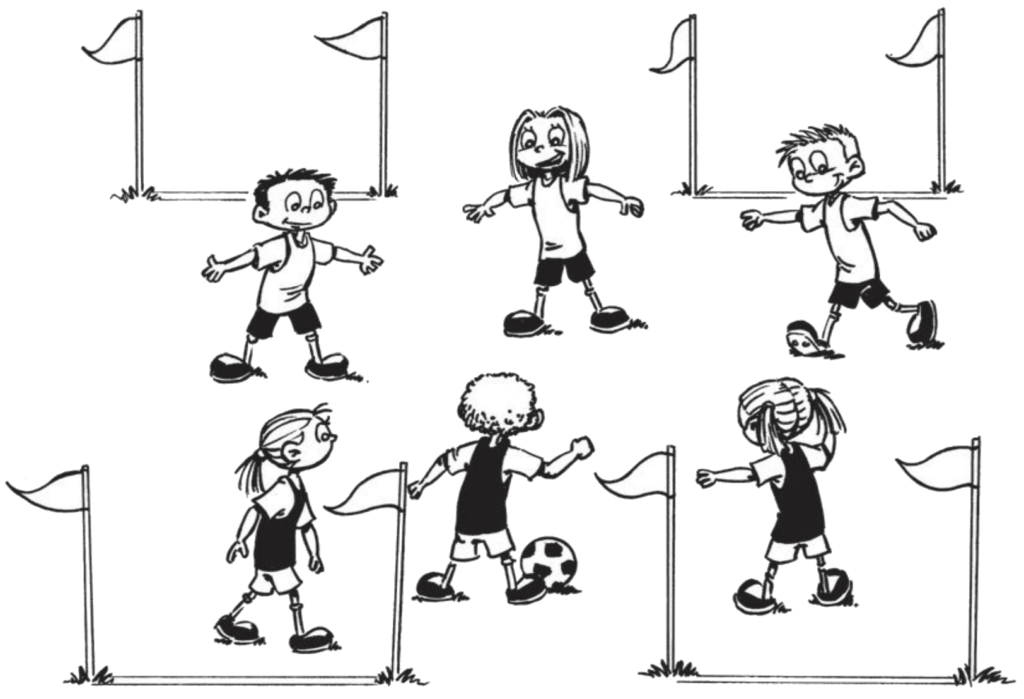 Depending on the size of the field, form two teams with 5-10 players in each. The game is played on small goals.

All the players are seated except the goalkeepers (they are allowed to kneel down). The ball can only be kicked with the foot. The players can move around on all fours, lying on their back, and with their hands on their backs. The game is played observing all the rules of a football game or as set out by the coach or children themselves. The team that scores more goals wins. 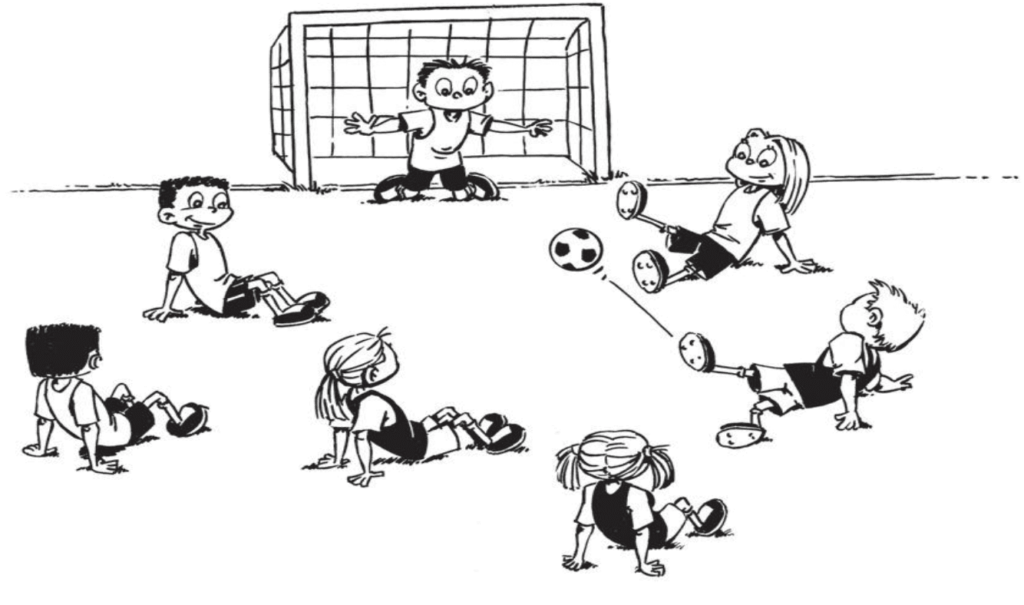 Dribbling in limited space in coordination with placing

Hit other balls with your own.
Who hits the most balls in two minutes?

Participants are divided into two groups of eight. Each group forms a circle. The players are all turned to the centre of the circle. At a given signal, the coach and his/her assistant pass a ball to the player in the circle that starts the game. The player catches the ball, runs around the circle, goes back to his/her place and passes the ball to his/her other teammates to repeat the task. The team that finishes in the shortest time possible wins the competition.

Mark a large circle with markers/cones (1 for each player), each at 1.5-2 metres distance from one another. All the players are standing beside their cones, while the coach is in the middle of the circle. Players are told that they are playing for Denmark, France, or South Africa. At the beginning, you should use only three countries and remember to choose a country for yourself. The person in the middle has to decide which country he/she should call out. When he/she calls out France, all the french players have to change their positions, while the others remain beside their cones. The person in the middle runs straight to one of the markers/cones. The player who lost his/her cone to the person in the middle, goes to the centre of the circle and now he/she gets to decide which county is to be called out. If he/she shouts SALAD EVERYBODY has to change their places.