If a player gets touched (with or without a ball) while he/she is on the opponents side of the field, he/she has to go back and try again. Players first carry the ball and then they start dribbling. You should also try the TIME OUT tactics (see for yourselves). At a later point, players can consider running without a ball.

The game is played by two teams with two players. The captain of the first team tosses the JACK-ball at about 10- 15 metres distance. That done, the first player in the team tosses his/her ball trying to get it as close to the JACK- ball as possible. After that, the first player from the other team does the same and the game goes on until all the balls have been tossed. Balls can also be shot in various ways (with the outer or full instep, with a stretched foot, with the inner or the outer side of the foot, with a volley, semi-volley, or a drop-kick.

Each team is given four balls and when they have finished and counted their points, the next team can start their game by kicking/tossing their JACK-ball. The first team to score 13 points wins.

Dribbling in limited space in coordination with placing

Hit other balls with your own.
Who hits the most balls in two minutes?

Cooperation around a cone quadrangle

The ball is either played straight away, or after being received in various different ways (with or without feints). The players are outside the corners of the cone quadrangle

The ball has to go around the quadrangle

Play the ball from both sides of the cones.
Play the ball around the quadrangle in both directions.
Pass the ball with the closer foot (the ball must not swerve).
Play where the lines can be taken advantage of.
Receive the ball and dribble it with various parts of the foot; turn around a cone and pass it to another player.

The ball is in the centre of the playground and players are gathered around it. At the signal “Shoot away!”, i.e. when the name of a participant is called out, he/she takes the ball and tries to hit one of the players. The other players are running away as fast as they can to save themselves. The one who gets hit has to complete a task of some sort and then the roles change.

Kicking the balls out

All the players are dribbling their balls in a marked area. One player is without a ball of his own (catcher) and he/she is allowed to kick other players’ balls out of the field. Dribblers try to shield and keep the balls in their possession. If the catcher manages to kick out one of the balls, he/she gets his/her own and becomes a dribbler him/herself or else he/she can continue to attack other players until he/she has kicked out all their balls. The last player to lose his/her ball is the best dribbler, whereas the catcher who has managed to kick out all the balls in shortest time possible becomes the best catcher.

Form two teams. Players have at least one ball. The balls have been arranged along the goal-lines of both teams. The aim is to dribble as many balls of the other team as possible to the goal-line of your own team. Dribblers can be caught/touched by their opponents, in which case they have to give the ball back and return to their goal-lines to start again.

A nest is full of balls that players should steal (one at a time). Players are safe when they get to their side of the playground. If they are touched (with or without a ball) while in their opponents area, they have to go back and start again. At first, players can carry the ball. Later, they should start dribbling. You should also try to use TIME OUT (to agree on the tactics). 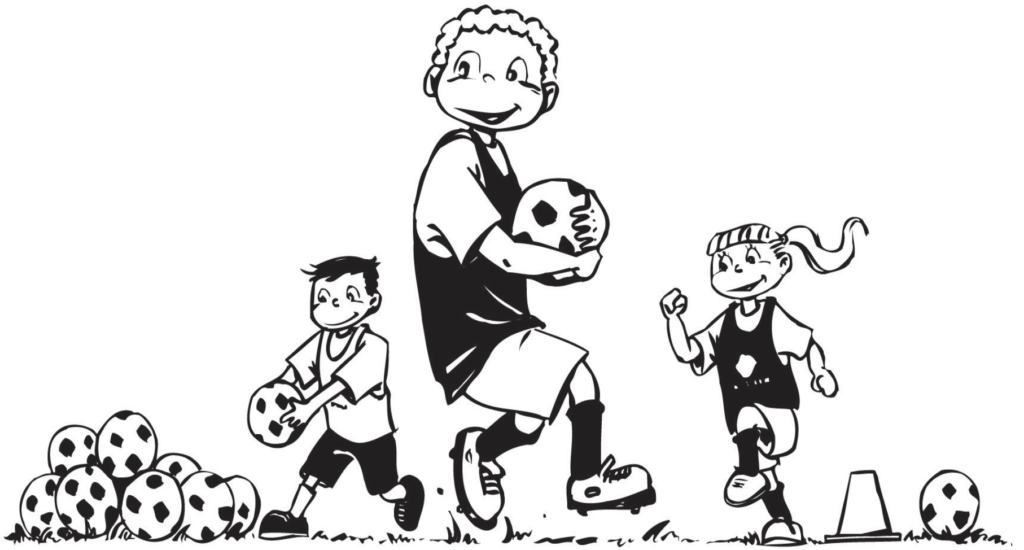 Participants are divided into two groups of eight. Each group forms a circle. The players are all turned to the centre of the circle. At a given signal, the coach and his/her assistant pass a ball to the player in the circle that starts the game. The player catches the ball, runs around the circle, goes back to his/her place and passes the ball to his/her other teammates to repeat the task. The team that finishes in the shortest time possible wins the competition.

Form a circle. One of the participants is holding a ball in his/her hands. He/she has the possibility to trick someone or throw him/her the ball. Other players keep their arms down to their bodies. The participant that reacts to the ball when he/she is being tricked either gets penalty points or drops out.

Mark a large circle with markers/cones (1 for each player), each at 1.5-2 metres distance from one another. All the players are standing beside their cones, while the coach is in the middle of the circle. Players are told that they are playing for Denmark, France, or South Africa. At the beginning, you should use only three countries and remember to choose a country for yourself. The person in the middle has to decide which country he/she should call out. When he/she calls out France, all the French players have to change their positions, while the others remain beside their cones. The person in the middle runs straight to one of the markers/cones. The player who lost his/her cone to the person in the middle, goes to the centre of the circle and now he/she gets to decide which county is to be called out. If he/she shouts, SALAD, EVERYBODY has to change their places.