In a classic football training the aim of finishing is improving the technical and tactical aspects of attack and defence. Playing football at our school means acquiring the first tactical knowledge (changing positions, lines of movement, opening up, covering a player, and covering a zone), but much greater attention is given to the improvement of the basic football technique, especially the kicking technique. Shooting at a goal and scoring is the greatest satisfaction a player can have, especially a child. Coaches have an opportunity to heat up the working atmosphere by organising different competitions (with a lot of laughter and joy), cheering, applauding, scoring goals, and defending. 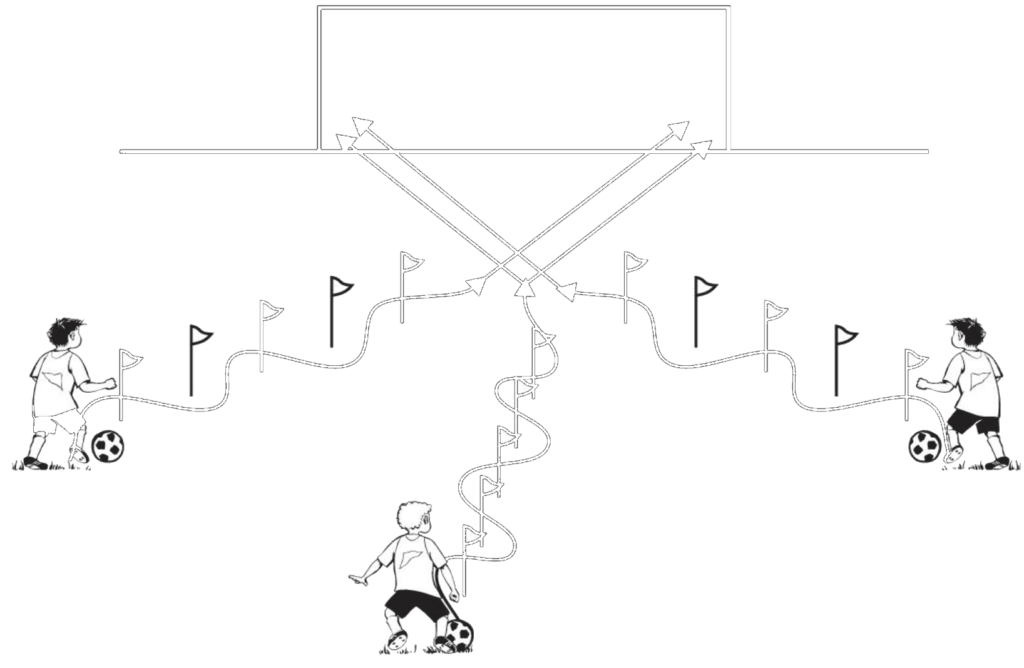 EXAMPLES OF EXERCISES IMPROVING THE COOPERATION OF TWO ATTACKERS

SHOOTING AFTER TAKING OVER THE BALL

All players in a group participate; they are divided into two or more groups, playing on one, two, or more goals. One by one, players from group A lead the ball towards their teammates from group B who, upon meeting players from group A, take over the ball and play it to the coach (standing at the 16-metre line). The coach returns the ball playing a double pass for player B to take an immediate shot at the goal. After completing the action, players exchange their positions.

Cooperation between two attackers in a 2:1 game 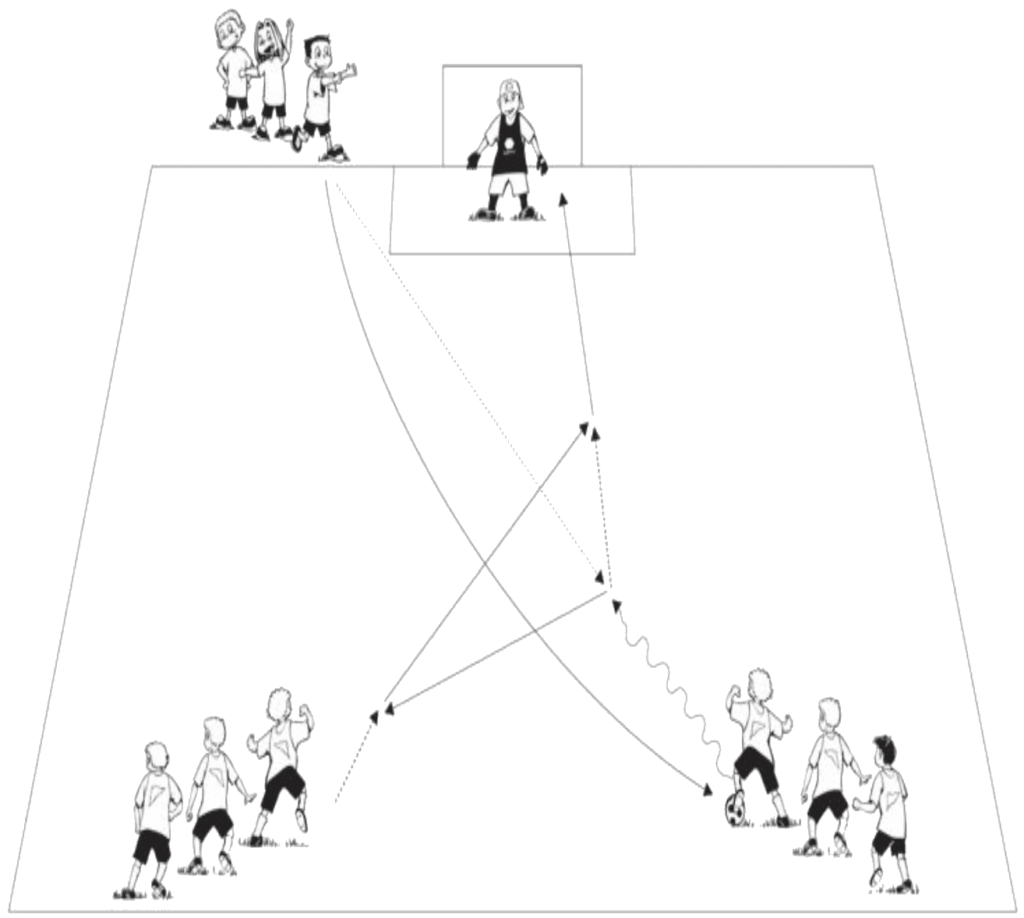 Passing the ball diagonally or in depth, leaving the ball for the team-mate and taking the shot 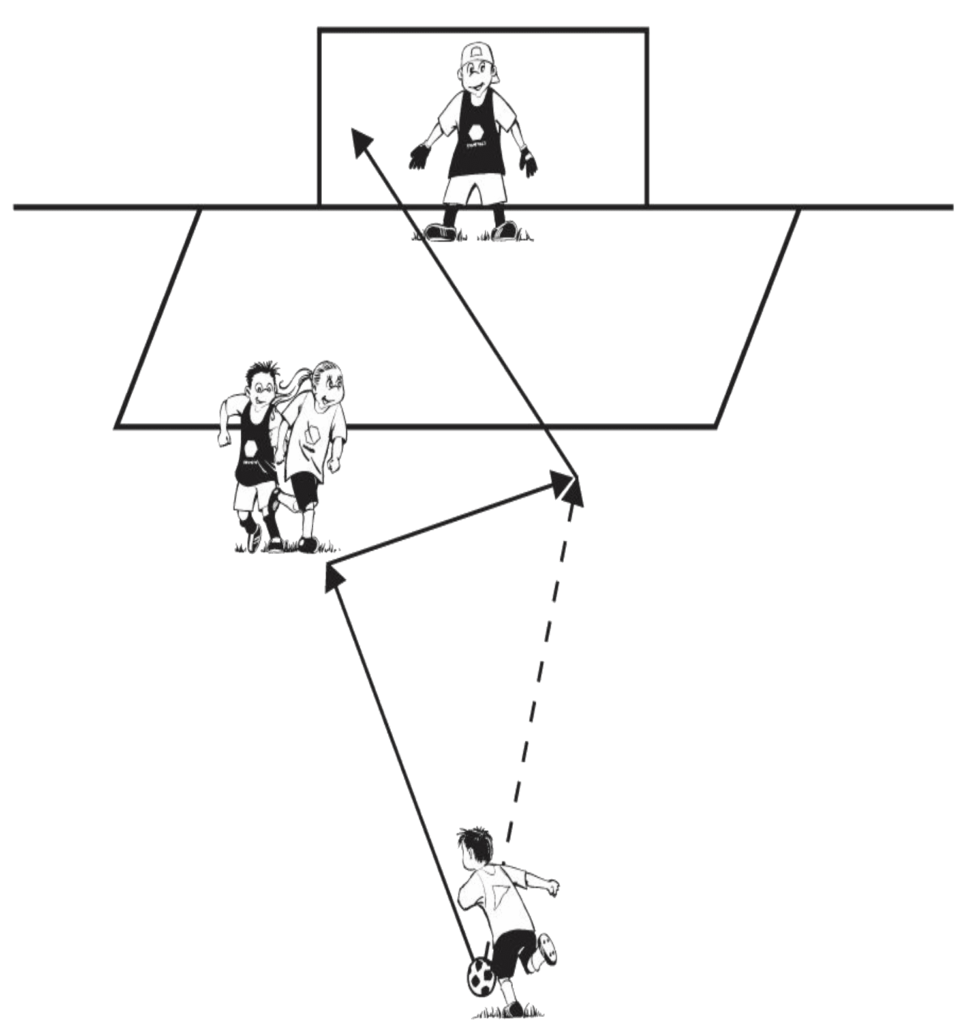 Diagonal - in-depth pass, with a fake double-pass and shot on goal 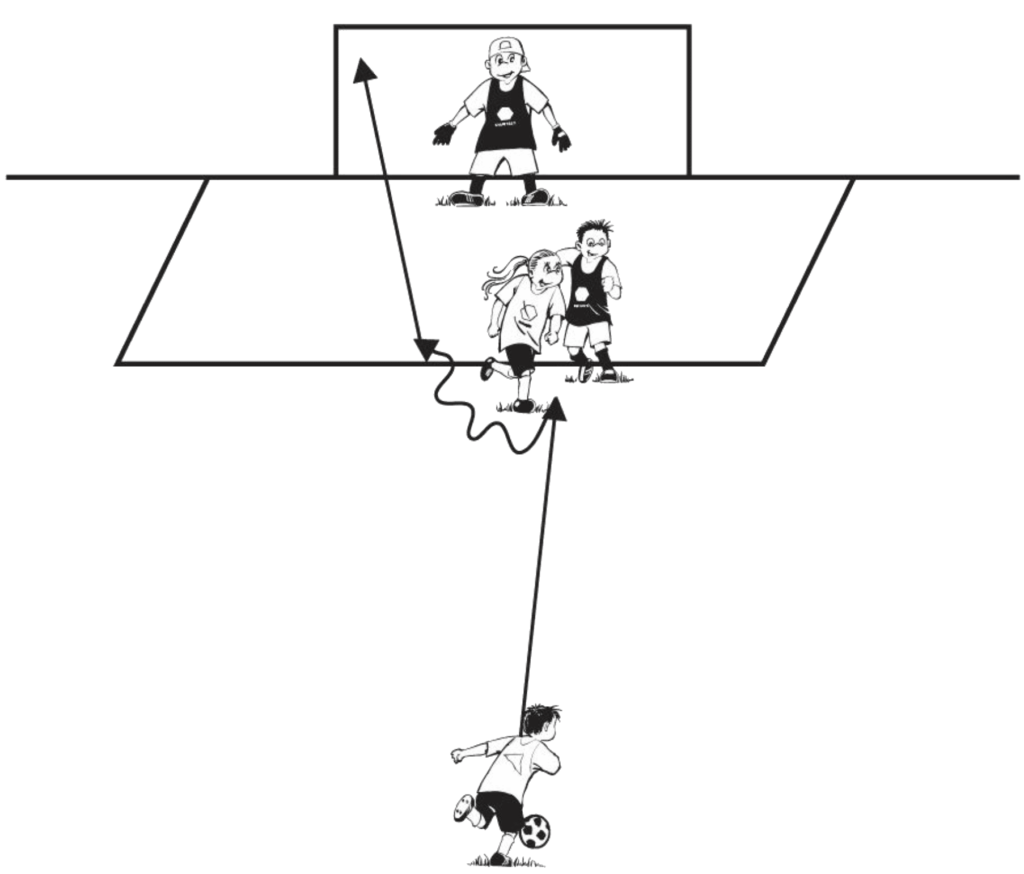 The players are in front of the goal

Balls are passed and dribbled towards the goal.
The coach is pointing at the spot from which the shot is to be taken, while the passer is semi-actively obstructing the attacker. 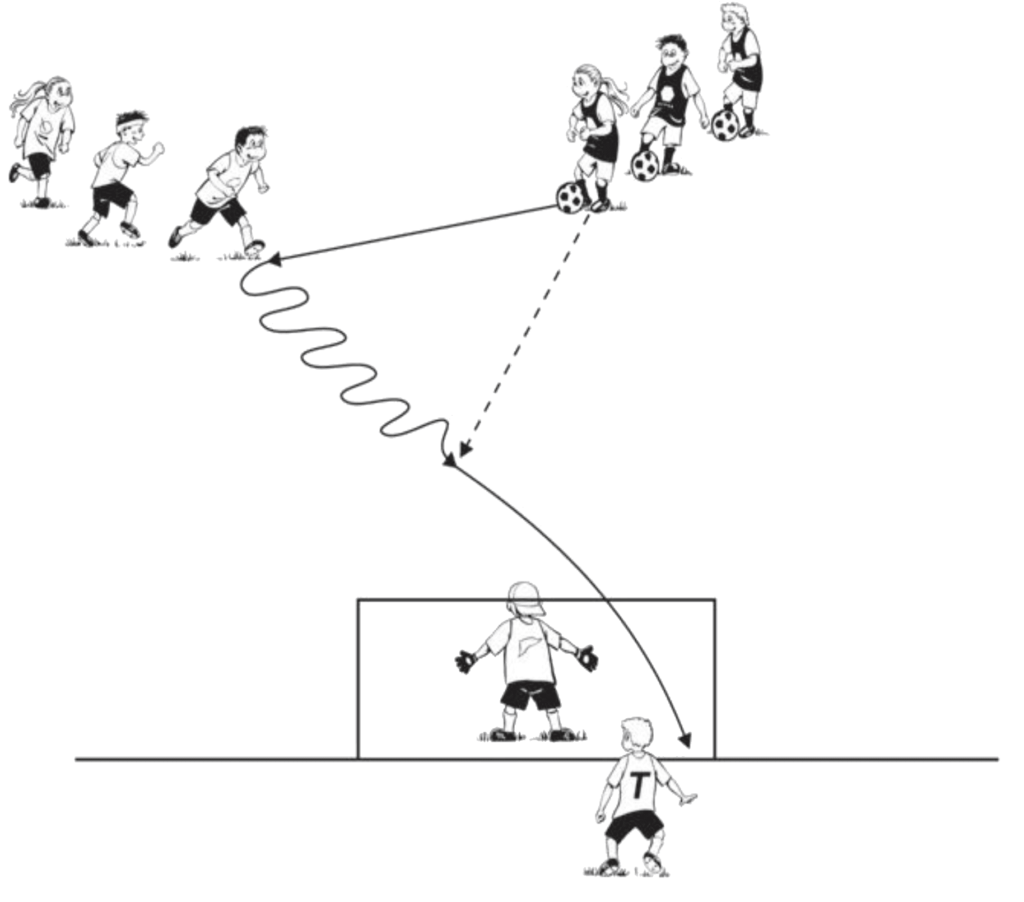 Mark the lines in front of both goals at about 8 or 10 metres distance. Every goal that is scored behind the line counts twice (emphasise the full-instep shot).

A 2:2 game with the coach serving the ball

Working for two minutes and make two-minute breaks three or four times. The coach throws/serves the ball for a 2:2 game with a finishing. A new ball is served every time a goal is scored or missed to keep on playing without interruptions.

After a number of attempts or after a period of time, teams change, as does the goalkeeper.

FINISHING – A GAME OF NUMBERS

Players are divided into two columns, their backs to the goal in line with the six yard box. A ball is placed at the distance of the penalty-kick and two cones at the edge of the eighteen yard box. Every player is given his/her own number (1, 2, 3, 4, 5 etc.) and at the coachs call-out, the two players from each column race to the cones and back. The one who gets to the ball first shoots at the goal. The player wins a point for shooting at the goal and should he/she score a goal his/her group gets two points. The goal is made shorter with cones set at one metre from the goal-posts. Players can start from a squatting, sitting, lying, or kneeling position.

The shooting-distance will depend on the ability of the group.

Players must not make too long a pause between the shots. Observe the queue. One group can play one of those small games while the other shoots at the goal.