Soccer is a ball game played by 2 teams of 11 players each. The object is to get the ball into your opponent’s goal. The winner is the team that scores the most goals by the end of the game.

Size of field:
The field must be rectangular, that’s pretty much it. The field size depends on good judgment of how many players on each side. And the size of your goals. The more you play or watch soccer the better you will get at judging a field size. You want it big enough to keep ball in play but small enough to engage all players and prevent kick and chase ball. To be considered true international competition basic soccer rules (11 vs 11) field must be: 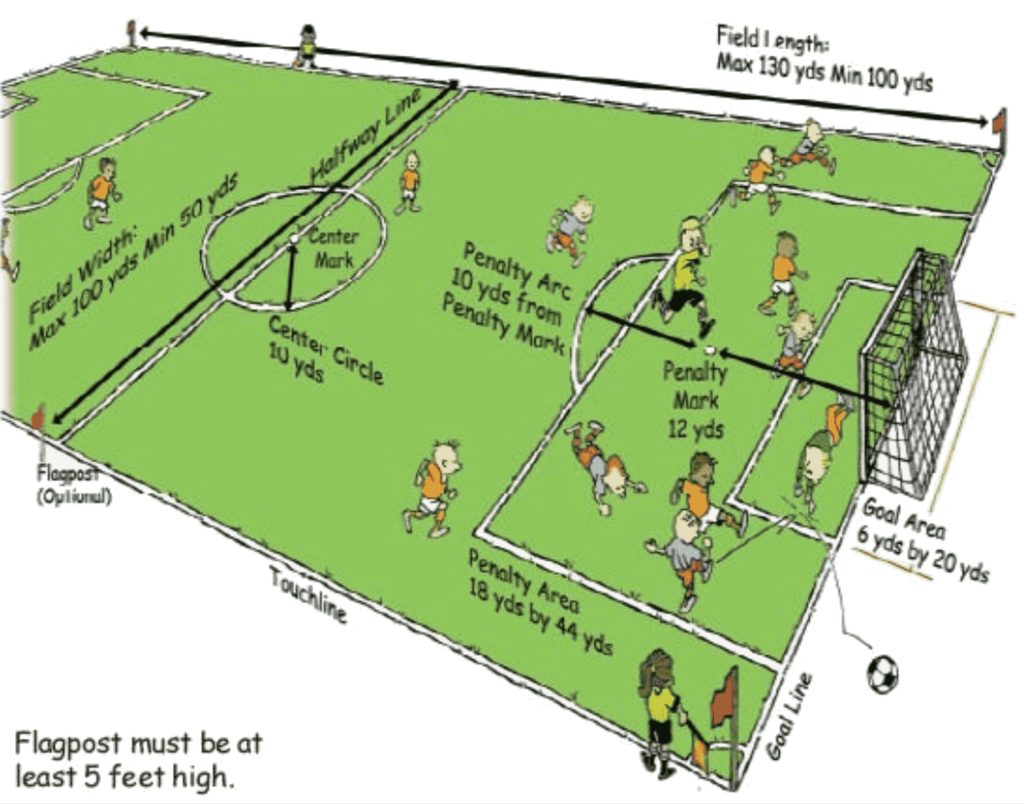 There are 11 players on the field at a time. There are a variety of ways the positions can line up on the field, and some positions are called by several different names.

You need a soccer ball and a goal to play a game. The age of the players and the level of competition determine what type of soccer ball is used. To find the appropriate size ball for your situation, see soccer ball sizes.

It is highly recommended that every player wear shin guards to protect their lower legs when they inadvertently get kicked. A pair of soccer cleats with rubber studs are recommended to help players get better traction on the field.

The goalkeeper must wear different colors than her teammates to distinguish herself from the other players. Goalies may also wear protective goalie gloves. 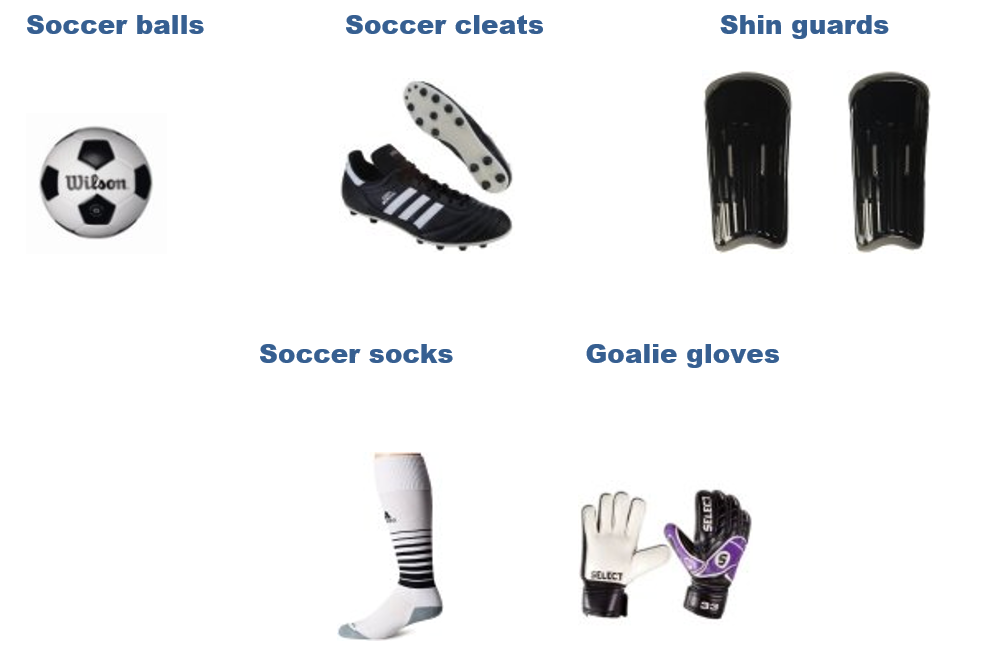 The referee has the obligation of catching and enforcing infractions of the rules. Misconduct may have on or a combination of the following consequences:

A coin toss determines which team will kick off first and which goal teams will defend. To start the game, the ball is placed in the center of the circle at mid-field and teams are lined up on their respective sides of the field. Only the kicker may be in the center circle for the opening kick, and all other players must remain outside the circle until contact is made with the ball.

Once kicked, the ball has to travel at least one full roll, and the kicker can’t touch it again until another player kicks it first.

Except when throwing the ball in from out-of-bounds, no players are allowed to touch the ball with their hands except the goalie. Players can use any other part of their body to contact the ball. They may use their feet, head, thigh, chest, or back to stop, control, or pass the ball.

A penalty (free kick) is assessed when a player touches the ball with any part of their hands or arms.

A goal is scored when the whole ball crosses the goal line under the crossbar and between the goal posts.

This law is the one that give new fans the most headache. Here is a quick summary.

Only an attacker can be considered offside. The offside rule does not apply to the team without the ball. A player is offside when they are closest to the defending team goal or end line than both the ball and the opponent’s second last player when the ball is played (passed to or passed into an area in which the player engages in play).

There are two types of free kicks in soccer. Indirect kicks are awarded for less violent or interruptions to the game. It is awarded at the spot the ball was last and does not need a referees whistle to restart unless the attacking team asked for their 9.15 meters to the wall. The ball has to touch another player before it can directly be kicked into the goal.

The direct kick, on the other hand, can be directly kicked to goal on the restart whistle by the referee. The 9.15 meters to the wall is also applied here.

The Penalty Kick: A penalty is awarded when the defending team commits an infraction or foul inside the 18 yard penalty box. The ball is placed on the penalty spot (12 yards from the goal line) and the shooter must kick the ball in one forward motion without touching the ball twice. The goalkeeper must remain on the goal line until the shooter strikes the ball.

The Throw In: When the ball leaves the field from the side or touch line it is a throw in. The sideline assistant referee signals who’s throw in it is by point the flag to the direction that team is attacking. There are no offside on throw ins, and you can’t score directly from a throw in. A proper throw in is both feet need to have contact with the ground at time of throw. Also, the arms need to move from back of the head to the front over the head. No side throws allowed.

Goal Kicks: A goal kick is give when the attacking team touches the ball last before it leaves the end or goal line. The goal keeper (or any other player on his team) places the ball anywhere in the goal area to restart play. Prior to 2019 the ball had to leave the 18 yard penalty box before a second player could touch it. This has since changed. Now, the ball can be a simple touch to a teammate inside the 18 yard box. The opposing team is not allowed inside the 18 yard penalty box when the kick is taken. 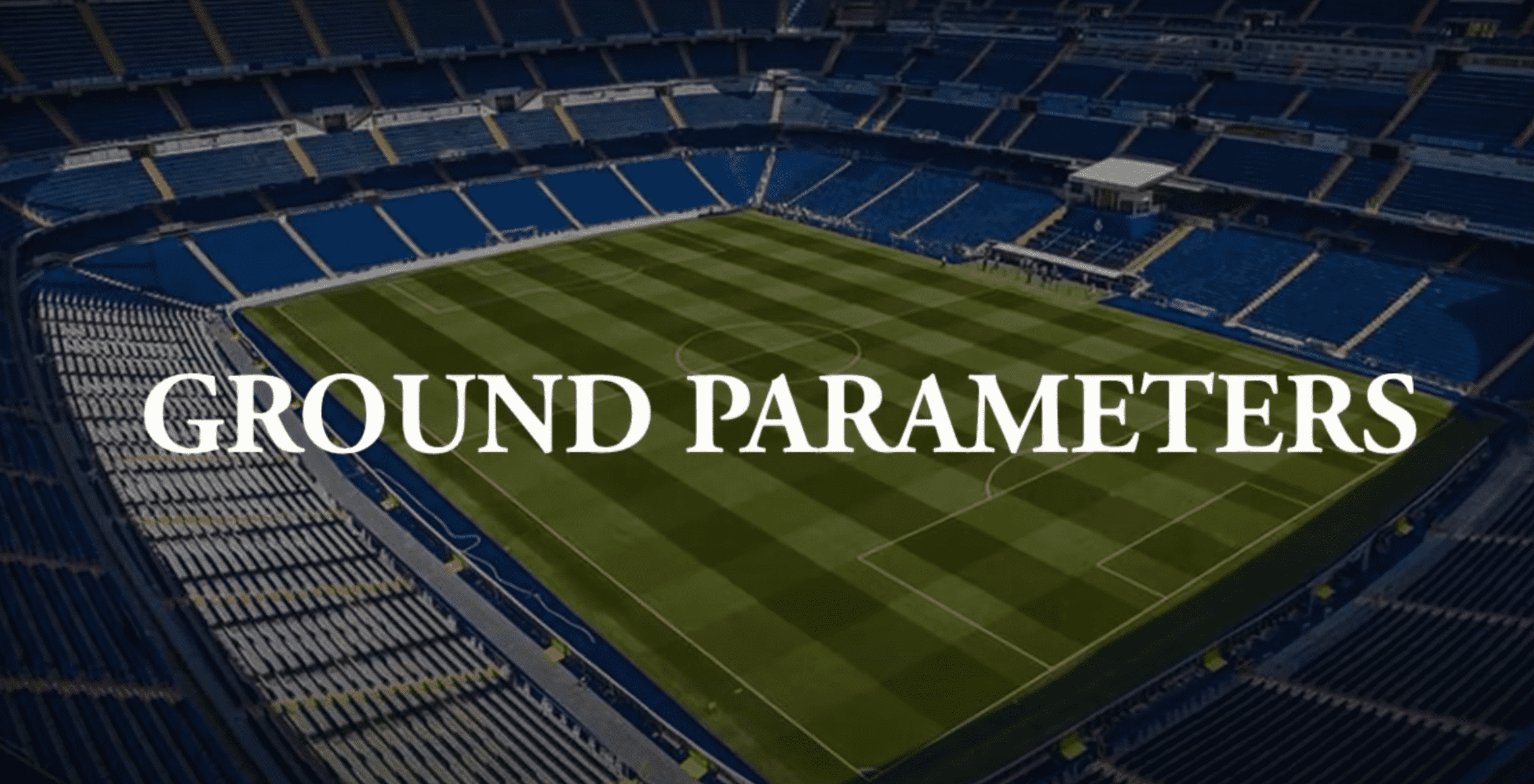